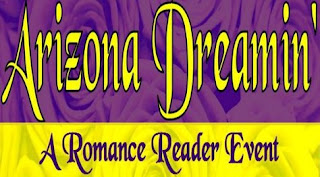 Once a year, romance authors from around Arizona come together for the successful and exciting Arizona Dreamin' - A Romance Reader Event! It doesn't matter what type of romance you're addicted to, readers are able to meet with their favorite authors, meet new ones, an satisfy their cravings for all things SWOON!

This year, creators of the raved about event are upping the ante, releasing a box set full of all those things that leave readers breathless - hot kisses, incredible story lines, sexual tension, and characters we can't help but fall in love with. 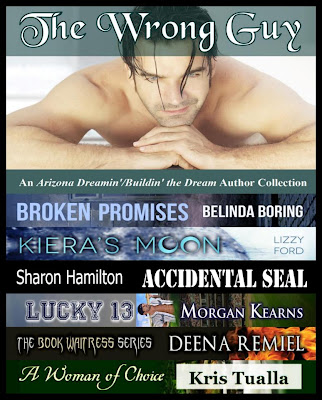 BROKEN PROMISES – Belinda Boring
What would you do if the man you loved became one of your greatest enemies? Would your love be enough to save him? All Bri wanted to do was spend her Friday night with the man she loved and adored. Little did she know leaving her home would result in her relationship with Quinn being tested beyond its limits.

KIERA’S MOON – Lizzy Ford
Starving artist Kiera always knew there was someone out there for her somewhere. But an exiled alien prince? Really? Together, they have the potential to heal an entire planet, if they can find a way to bridge the differences between them first.

ACCIDENTAL SEAL – Sharon Hamilton
What starts out as a meeting by accident becomes a hot affair neither one is ready
for. Navy SEAL Kyle Lansdowne is conflicted about getting Realtor Christy Nelson involved in his mission, but his hand is forced when he learns the same San Diego gang responsible for his teammate’s abduction has kidnapped her.

LUCKY 13 – Morgan Kearns
A painful past with one very prominent reminder molded Shayne Xavier into the woman she is. She isn’t bitter or jaded, though. She’s a realist. Men can’t be depended upon and only lead to shattered hearts.       Rockets Outfielder, Enrique Santiago wants nothing more than to prove Shayne wrong, but sometimes Happily-Ever-After is too good to be true.

BOOK WAITRESS – Deena Remiel
Camille Dutton learned early in life Satan was not to be trifled with. Escaping his evil clutches as a child, she's worried he's come back with a vengeance for her now. The portal between Hell and Earth is torn asunder, and it'll take everything she has, and then some, to close it. Satan won't go down easy, but nothing worth everything comes without a price.

A WOMAN OF CHOICE – Kris Tualla
1819, The Missouri Territory


A woman is viciously betrayed and abandoned by her unfaithful husband. She is rescued by a widower uninterested in love. In desperation, she becomes engaged to his best friend. One woman, three very different men. Life is about choices.

You can get your own copy for just 99c!!