Chapter ONE from IN IT TO WIN IT 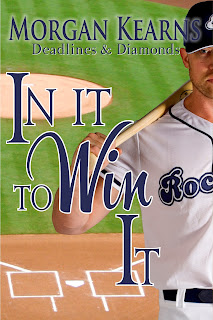 **psst--don't forget to enter the raffle at the end of the chapter. *wink*

GRAYSON PIERCE WAS LARGER THAN LIFE—and annoying as hell.
The man had been a thorn in Jane’s side for nearly twenty years—if she counted elementary school, she guessed it was even longer than that—and he’d never been a bigger pain in her ass than in this very moment.
“Can you do that, Jane?” Dale asked from behind his desk.
Dale was the News Director for KHB—and her boss. His blue eyes were no nonsense and as he ran a hand over his thinning blond hair, Jane knew that his question wasn’t up for debate.
Sweat coated her palms and she bit her lip. Jane wanted to say no. She wanted to say that there was no way she was going on the road to follow Pierce’s team around the freakin’ country while they played their way to the World Series. It was bad enough she had to report on how successful he was, but now, she was going to have to follow the jackass just to shove a microphone in his face so he could tell her how awesome he was.
She wasn’t bitter though.
“Sure thing, Dale,” she said through clenched teeth. “When do I leave?”
“You and Nate will head out tomorrow afternoon. First stop, Vegas.”
“Okay, I’ll go pack.” She turned on her heel but was stopped when Dale cleared his throat. She paused in the doorway of his office and her already sucky situation got worse.
“Get an exclusive if you can. Anything nobody else has. There’s a raise in it for ya.”

MAN, IT’D BEEN GOOD TO SEE JANE.
She was just as beautiful as he remembered. Her shiny brown hair had highlights he didn’t remember and was longer, sleeker than it used to be. It now hung just below her shoulders with just a bit of a curl at the ends.
Her eyes though, they hadn’t changed a bit. They were the most intoxicating green he’d ever seen. Even after all these years, and all of his travels all over the world, Grayson had still never found a shade that could compare. The closest he’d found was the deep green of freshly cut grass, but that didn’t have enough variations to be exactly right.
Grayson couldn’t get over how sexy she was. That was new. Her body had matured into that of a woman. He’d not dared touch her because he was afraid he wouldn’t be able to let go once he had her wrapped in his arms. And groping her in the locker room, in front of God and all his teammates would have just embarrassed them both.
Besides, it had been a long time since they’d crossed paths. He had a feeling that that was exactly the way she meant for it to be.
Yeah, how dense was he? She wouldn’t even shake his hand. He’d felt like an idiot with his hand stretched out to her, hanging in midair. He guessed he deserved it.
Acting like he hadn’t known her had been a pretty chicken-shit tactic, he had to admit. But standing there in front of her, he couldn’t—just couldn’t allow their reunion to happen in a crowded locker room.
Striding toward the elevators he shook his head, trying to clear it of the stricken expression on her face. He would make it up to her.
It had been ridiculously easy to get her room number. He felt like a letch, flashing a smile at the star-struck girl working the front desk. But that had been a means to an end and he’d learned a long time ago that Grayson Pierce could get just about anything he wanted. And a few things he didn’t—like phone numbers and ladies underwear.
The elevator ride to Jane’s floor happened in a blink, yet took a lifetime. He wanted to see her again. But then … wasn’t sure he did. He wanted her to smile at him the way she used to. The odds of that were pretty slim, he feared. The last few weeks of high school had been hell—and he wasn’t even sure why.
When the ding! signaled he’d reached his destination, his heart jumped into his throat and he suddenly felt sick to his stomach. He swiped a hand over his face from chin to eyebrows and continued the sweep through his hair. Sucking in a breath did nothing to calm his nerves.
The elevator doors started to close and Grayson was surprised when his arm flashed out to stop them. The doors retreated back into their pockets and he stepped out into the corridor. He took two steps forward, one back. Practically ran down the hall, only to turn and stalk away. The back and forth continued until he found himself standing in front of her door. It was now his arm’s turn to be indecisive, rising and falling. Fist poised at the door, only to be brutally shoved into his pocket.
Oh good hell! Was he a man or a mouse?
He lifted his arm again.

**Continue reading via Kindle, Nook, other ebook
a Rafflecopter giveaway
Posted by Morgan Kearns at 9:40 AM

Email ThisBlogThis!Share to TwitterShare to FacebookShare to Pinterest
Labels: Author Morgan Kearns, Deadlines x Diamonds, Giveaways, In It To Win It