I'm really excited to announce my upcoming title
Heart Ache
book one in the Bound by a Touch series.
Heart Ache is in the hands of my very capable editors
and is due out in January 2012. 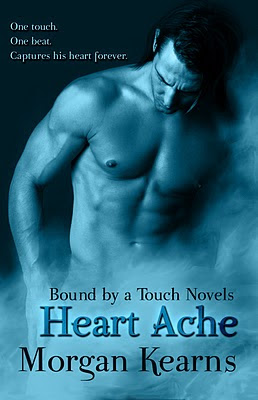 One Touch
Gabrielle Ryan felt an electric attraction to her new employer the first time he reached out and shook her hand. She dreams of him, fantasizes about him, but all Nikolai wants is an assistant—and to Gabby’s chagrin, it’s not to assist him with taking off his pants!
One Beat
An ache has inhabited Nikolai Voinea’s chest for the last four hundred years. Yet stubbornly resolute not to repeat his father’s mistakes, Nikolai refuses to take the one female who is his heart’s greatest desire.
Captures His Heart Forever
When murder charges make Gabby second guess everything she knows about him, she’s hurt and angry and determined to walk away. But Nikolai’s just as determined to do everything within his power to keep her.


Please go to Goodreads and mark HEART ACHE "to read".
Posted by Morgan Kearns at 12:01 AM