Today's sample comes from my paranormal short story
The Seduction of Damian
(The Gossip of Mysterious Lane #1)
currently available via Kindle, Nook, and other ebook.
In this snippet, Damian has learned that he has been voted
Paranormal Partners Magazine's Most Eligible Bachelor.
He's not excited about the title.
In fact, he's mortified.
The "honor" has been known to ruin a male's life.
***** 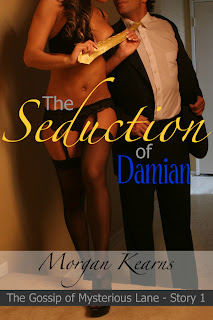 The night was warmer than it’d looked from his kitchen window and a trickle of sweat ran between his shoulder blades. The neighborhood was quiet, except for the caw of a few ravens as they winged toward their nests for the night, retreating to the mature trees—which would soon lose their leaves—hanging over the sidewalk.


Damian waved to a couple of ghouls as they strolled down the sidewalk. Their small bat bobbed along, stretching its leash to the limit.


“Congratulations!” The male ghoul’s thumb rose, his head tipping in an atta-boy. His wife’s yellow eyes moved over Damian in a slow analyzing appraisal. When her vivid blue tongue snaked out to run over her thin bottom lip, Damian fought a shudder and thanked whatever lucky star he might have that she was already taken.


Life as he knew it would never be the same.


He looked around at his yard and decided to trim the hedges, weed the flower beds, hand water the entire lawn … and for good measure, he would weed-whack something. Or maybe he would assess every blade of grass to assure the entire lawn was in fact the same length. Sucking in a deep breath, his lungs filled with fresh air and his mind cleared. His worries floated away on an exhale and Damian busied himself with the chores that were his stress release.


If nothing else, he could maintain control of his yard while the maelstrom whipped the rest of his life into chaos. At least he had Jocelyn. He now needed her friendship more than ever.


An orange housecat streaked across the street and raced between Damian’s legs. The thing turned around to hiss at him just before hurrying over to lift its leg on Damian’s prize rose bush.


Red clouded his vision and he had to remind himself not to strangle the young shifter. It wasn’t the kid’s fault he had no father to shake some sense into him. His mother was a saint and everyone could see she needed someone to take care of her.


“Get home!” Damian’s gaze narrowed and stared into the defiant yellow eyes. He stomped his foot and water droplets flew up from the grass, coating his legs. “Go home or I’ll have to take you there myself.”


The little cat blew a disgruntled breath out his nose and turned around to saunter arrogantly back across the street. If the kid went into Jocelyn’s yard, Damian would feel obligated to chase him out of there, too. Instead the shifter darted three houses down Mysterious Lane before wiggling under a Bougainvillea bush. He watched the cat disappear and more than half expected to find a little something strategically deposited on his welcome mat tomorrow evening. He hoped he remembered to look before he stepped in it and ruined yet another pair of shoes.


Glancing house by house he noticed all was quiet, no sign of trouble—or females. Even Jocelyn’s house was dark. Which wasn’t unexpected. She worked the evening shift at the museum four nights a week. He didn’t understand her draw to the musty old place. But who was he to judge? She loved her job.


She also loved to make him crazy!


The house was multi-colored, showing off Pepto-pink where the mint-green peeled away, and some kind of orange under the pink. The Kaleidoscope of color was an eyesore to everyone—except Jocelyn.


When she’d first moved in, he’d offered to fix the place up for her. Not out of the kindness of his heart, but because the sight of all that disrepair made his retinas burn. That had been a no-go and so he did his best to ignore the house while being friends with the female who lived inside the atrocity.
With a shake of the head he turned back to admire his own meticulously cut, green grass and recently painted white colonial home. He walked back up the long, flower-lined walkway, pausing at the front door with his hand on the handle when catcalls, whistles and car honks made his feet stutter. Without turning around he went inside to seriously consider taking Jocelyn up on her offer for sanctuary.