In today's Sample, HEART ACHE's Nikolai Voinea is awaiting Gabrielle's return to work.
She's been sick and life hasn't been the same without her.
***** 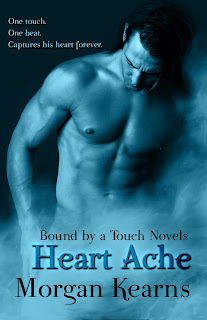 Thump-thump.
Thump-thump.
His blood sensed her a split second before he heard her.
The door to his office opened. Her tropical scent flooded the room; coconut and lemongrass. Her breath hitched. “Hey. I didn’t expect you to be here this early.”
His whole body warmed at the sound of her sweet voice. Thankfully his back faced the doorway. He needed a minute to compose himself. He took a deep breath, listening to her movements as she approached.
“Niko? Are you okay?”
Every footstep, every whisper of her clothing screamed through the silent air to his sensitive hearing as she crossed the room to him. He braced himself for the moment when he would turn and face the female who haunted his days, his nights, and every moment in between.
The light touch of her fingers brushing over his shoulder wasn’t necessarily a surprise, but knowledge didn’t stop the sharp intake of breath and his jump at her contact.
Startled by his reaction, she gasped, a quiet cooing sound that was nearly his undoing.
He turned with solemn reverence to observe the angel in front of him. He had to remind himself to keep his expression in check as he forced an emotionless smile.
Gabrielle Ryan, with her shiny auburn hair, her porcelain skin, and slim, toned body, caused every part of him to react to her mere presence. Her blue eyes searched his eyes, his face.
“I’m sorry. I thought you heard me come in.”
“You just surprised me.” He couldn’t very well tell her he craved her touch more than his next breath.
Her hand moved to touch the bare skin where his shirt had been rolled way from his forearm. Her brows crinkled. “Are you okay?”
“Yes. Are you feeling better?”
She smiled. “Much.”
“Glad to hear it. I hope you had a nice weekend?”
Weekends were an excruciating reality that bit him in the ass two days out of every seven. It was those two days he missed her like a man possessed. It was those two days he fretted over her social calendar. Gabby was beautiful and, to Nikolai’s horror, he wasn’t the only male–vampire or human–who’d noticed.
“My weekend was okay,” she whispered, using her bejeweled left hand to brush a curl away from her cheek.
Oh, sweet Goddess, no.
His stomach rolled, his heart threatened to beat right out of his chest, as he saw the pathetic excuse for a diamond that had been placed on her finger by a male who wasn’t him.
He choked back his wounded pride and breaking heart. “What’s that on your finger, Gabby?”
She took a deep breath, holding it for moment before exhaling. Her cheeks flooded with color and her eyes suddenly found the carpeting the most interesting thing in the room.
“I’m engaged.”

*****
Thanks for stopping by!
Get your copy of HEART ACHE today.
For more Samples click *here*
Posted by Morgan Kearns at 12:01 AM